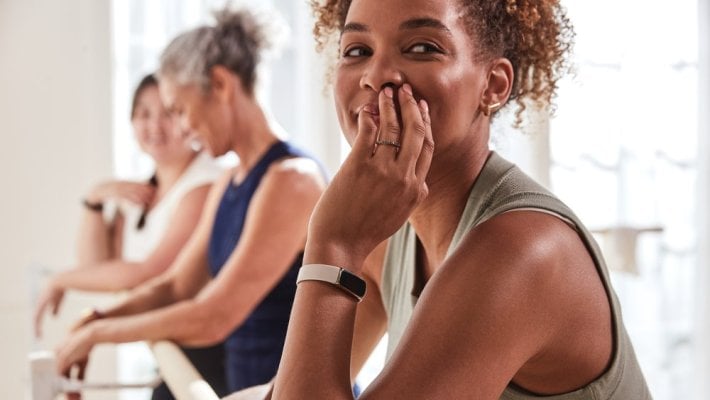 It’s been a strange few years for Fitbit. After defining the fitness tracking space, the company was late to the smartwatch trend but could still ride that wave to a rebound. But while watches have received most of the press the now Google-owned company has garnered in recent years, bands still comprise a substantial part of its business.

Today Fitbit announced the arrival of the Luxe. It’s a weird product. There’s certainly a market for it, but it’s hard to say how much of a niche we’re talking about here. The company called its target demo “a unique set of buyers whose needs weren’t being met.” Specifically, the product is a “fashioned-forward” tracker for people looking for something a bit nicer than a plastic band to wear out and about.

Frankly, it’s hard not to see some reflections of Misfit’s take on the category. Perhaps the Fossil-owned company was ahead of its time. At $149, the device is priced between the Charge and the Versa but decidedly closer to the former. That is to say, it’s pricey in the grand scheme of fitness trackers but more or less in line with other Fitbit products.

It is, indeed, a nice-looking tracker, as far as these things go, featuring a color touchscreen surrounded by a stainless steel case. That’s coupled with a broad range of accessories, ranging from leather to gold-colored stainless steel.

Over the past year, we’ve had to think differently about our health – from keeping an eye out for possible COVID-19 symptoms to managing the ongoing stress and anxiety of today’s world. Even though we are starting to see positive changes, working on your holistic health has never been more critical. That’s why we’ve been resolute in introducing products to support you in staying mentally well and physically active. We’ve made significant technological advancements with Luxe, creating a smaller, slimmer, beautifully designed tracker packed with advanced features – some that were previously only available with our smartwatches – making these tools accessible to even more people around the globe.

Indeed, physical and mental health has been top of mind over the past year, even as step counts have dramatically plummeted. The device sports the usual array of Fitbit sensors, tracking activity, sleep, and stress. It also works with several different mindfulness/meditation apps, including its recently announced partnership with Deepak Chopra. The band is up for preorder starting today and starts shipping in the spring.