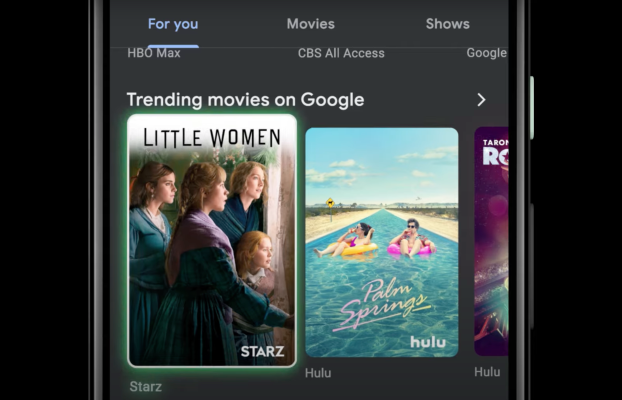 The app in earlier days was known as “Google Play Movies & TV” (whew!) but rebranded to just “Google TV” alongside the changes that rolled out to Chromecast in September. Here, users can browse over 700,000 movie and TV episodes from top streaming apps, find new things to watch, rent, or purchase movies and shows, including new releases.

Now, Google is updating the app’s look-and-feel with new 16:9 widescreen movie and show posters, which it says will give the app a more “cinematic” look.

In addition, it’s adding the Rotten Tomatoes scores directly under each poster to help users make decisions about what they want to watch next. You can also visit a movie or TV show’s details page and mark it as “watched” to improve the app’s recommendations. This will allow Google TV to make further recommendations based on your watch history and could be helpful if you’re not a regular app user to start tailoring its suggestions to your interests. However, the feature won’t help you keep up with your progress in a show, as the Reelgood or TV Time apps allow for, as you can’t mark individual episodes as watched, only the entire series.

The recommendations are another feature that’s been improved with the latest release to align with what you’d see with the TV experience. In addition to featuring more rows of personalized suggestions to browse through, the app’s recommendation system will now be based on what you’ve watched in the past, your interests from your Google account, and trending and popular content in your region. Trending recommendations are sourced from what’s popular or trending across Google products, what’s being mentioned across the web, as well as hand-picked selections from human editors. For instance, you could see recommendations that suggest “summer blockbusters” or other timely suggestions.

Users will also now see a new movie and recommendations as new content is released from services they subscribe to.

The app has also expanded its content lineup by adding new providers like Discovery+, Viki, Cartoon Network, PBS Kids, and Boomerang and on-demand content from live TV services, including, of course, YouTube TV as well as Philo and fuboTV. These providers were previously unavailable for search and discovery inside the mobile app, following the platform update in the fall.

During its I/O Developer conference in May, Google said that the Android TV OS had reached an install base of 80 million monthly active devices. Still, it didn’t break down how many consumers streamed on through the Roku and Fire TV rival, Google TV for Chromecast, powered by Android TV OS under the hood. Instead, Google combined that figure with the numerous Android TV OS-powered devices on the market that include those offered by other streaming device brand partners and TV service providers — meaning the number had operator-tier and set-top boxes, too, which is a different type of market.

The company said the new features are available now on the Google TV Android app in the U.S. but couldn’t offer a timeline for other platforms or an international expansion.

Google is delaying its deprecation of tracking cookies – TechCrunch

Spotlight gets more powerful in iOS 15, even lets you install...