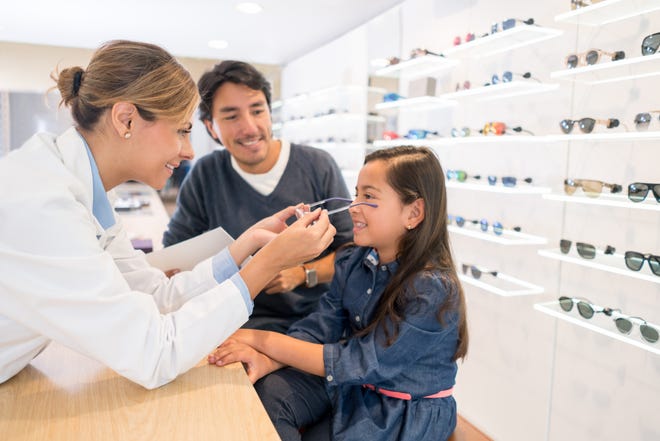 “Kids usually are pretty self-sufficient, and their eyes are pretty tough. But we’ve seen lots of problems this last year, which we’re attributing to the prolonged intense, close work that has been their lives,” says Dr. David Epley, a pediatric ophthalmologist in Kirkland, Wash., and clinical spokesperson for the American Academy of Ophthalmology. Close or near work involves focusing your eyes on a nearby object. “Normally, in school, you’re looking at the board, and then you’re looking up close, and then you’re outside at recess, and you’re kind of varying where your gaze is. But with online schooling, the classroom is up close, and the homework’s up close. Their friend circles are on a screen up close; their playtime is on a screen up close. It’s really changed the dynamic a bit.”

Epley and Dr. Sylvia Yoo, a pediatric ophthalmologist and assistant professor of ophthalmology at Tufts University School of Medicine in Boston, say they have had many young patients complaining of eyestrain or being diagnosed as nearsighted (myopia) or increased nearsightedness since the start of the pandemic.

Myopia was already a growing problem in the U.S. before COVID-19, with its prevalence increasing from 25 percent of Americans in the 1970s to 42 percent in the 2000s, says Yoo. “Now in the last year, since kids are using the screen even more because of school … it’s hard to tell kids to decrease screen time,” she says. “This epidemic of myopia seems to be related to just general lifestyle changes where (kids are) just generally spending more time inside using the screen, doing more near activities.”

To decrease the risk of worsening nearsightedness, Yoo recommends taking breaks from prolonged screen time as much as possible and trying to spend time outdoors every day. Epley explains that the natural light, in addition to the break from screens or close work, protects against myopia.

“(We) definitely have seen an uptick in the number of kids that are becoming nearsighted this past year,” Epley says. “We don’t know for sure that it’s related to the pandemic, but it’s pretty coincidental otherwise.”

Doctors have also seen more patients for eyestrain with symptoms like headaches and dry eyes. Yoo says when kids are looking at the screen for an extended period, they may not be blinking as much, making the eyes dry and causing eycausingigue. In addition, their eyes are making a focusing effort to be able to see the screen clearly. “Doing that continuously for a long period could cause some eye fatigue or eyestrain,” she says.

One tip to avoid these problems is the 20-20-20 rule: Every 20 minutes while they’re using a screen, kids should look at something that’s 20 feet away for 20 seconds.

Some parents have turned to blue-light glasses, which block blue-light wavelengths from screens, thinking they will help with eyestrain or avoid myopia. But they’re not really addressing those problems.

“The one thing that’s important to know … is that our screens are not producing a lot of ultraviolet light or the type of blue light that is kind of harmful to our eyes over time. It’s not really dangerous to be looking at the screen from that standpoint,” says Epley. “Blue-light glasses are not needed for the health of the eyes long term. They can be more comfortable for some children,” though if they are sensitive to the brightness or harshness of the screen.

How can parents spot a problem with their child’s eyes? Kids might be squinting, having headaches, avoiding the screen, or not paying attention in class. “Your observations of their behavior will sort of tip you off,” Epley says. “If they’re not able to see a microwave clock across the room, or you’re looking at something down the street or an airplane in the sky … and the child’s not able to see it, and this is not just a one-time thing, but consistently.”

The best way to grow your tech career? Treat it like an app –...