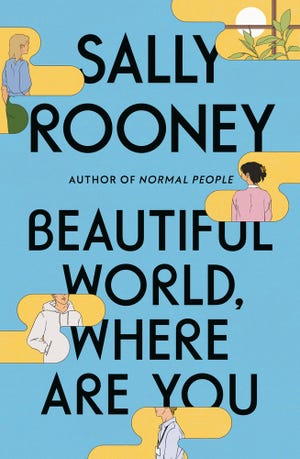 Facebook
Twitter
Pinterest
WhatsApp
How do we go about the daily business of living when the world is collapsing around us? How could our insignificant little lives – our day jobs and dinner parties, unanswered emails and bad first dates, minuscule insecurities, and anxieties – possibly matter in the face of looming economic, social and environmental collapse? What is the value of sex and friendship, and literature about sex and friendship, when the world is quite literally burning?

In Sally Rooney’s fiction, they still matter very much. The Irish author’s new novel, “Beautiful World, Where Are You” (Farrar, Straus and Giroux, 368 pp.  ★★★★ out of four), is her third consecutive banger after “Normal People” and “Conversations With Friends,” an intimate and piercingly bright story about sex and friendship that finds the profound in the everyday.

Two college friends, Alice and Eileen – young Irish women hovering around 30 – send each other emails, appraising each other of their lives and fretting about the state of the world. (“Aren’t we unfortunate babies to be born when the world ended?” Alice writes.)

Review: Peter Heller’s new COVID-era thriller ‘The Guide’ will fill you with dread, in the best way

Alice is a successful novelist with two bestselling books and the sudden wealth, fame, and literary acclaim that come with them (how much of Alice is autobiographical is anyone’s guess; Rooney is decidedly offline). Her bestsellers also came with a nervous breakdown and a stint in the hospital from which she’s still recovering. While she waxes philosophical in her emails to Eileen about rightwing politics, wealth inequality, and the meaning (or meaninglessness) of life (“But why should anyone be rich and famous while other people live in desperate poverty?” the reluctant millionaire muses), she’s begun seeing a man, Felix, she met on Tinder.

A blue-collar worker in an Amazon-like warehouse, Felix doesn’t read books, never mind Alice’s, and he’s not terribly impressed or intimidated by Alice’s success. Alice invites him to accompany her to Rome on a literary trip, and they begin a relationship that looks more like a power struggle despite a disastrous first date and lack of common ground.

Eileen, meanwhile, is foundering in work and love. She is Alice’s professional foil, toiling and underpaid as an editor at a small literary magazine. “I have to buy illegal antibiotics on the internet when I get a urinary tract infection because I’m too poor to go to the doctor,” she opines, “and every election everywhere on earth makes me feel like I’m physically getting kicked. In the face.” Single now after the failure of a long-term relationship, she pines for Simon, an older friend she’s loved since childhood, tall and golden with a succession of ever-younger girlfriends who aren’t Eileen.

Alice and Eileen orbit one another through emails, pushing and prodding and pulling away until all four young adults come crashing together in person, their desires, neuroses, and class conflicts laid bare. What constitutes a happy life in the 21st century, and can these millennials manage to live one?

If one were to plot out the action, not a whole lot happens really in “Beautiful World.” It’s just four people going about the daily business of living: preparing and serving meals, smoking and stubbing out cigarettes, pouring another glass of wine, typing and deleting and retyping text messages.

“Beautiful World” is sensual with lingering details: “A fruit crumbles warming in the oven. On the table, the detritus of a meal, a soiled napkin, sodden leaves in the salad bowl, soft drops of blue-white candle wax on the tablecloth.” Rooney is masterful at finding profound meaning in the quotidian, ramping up the tension and heightening the stakes in the most microscopic interactions. The pages fly as fast as in any thriller to determine if these four young adults can figure out how and why to live.

“So, of course, amid everything,” Alice writes, “the state of the world being what it is, humanity on the cusp of extinction, here I am writing another email about sex and friendship. What else is there to live for?”

What else is there to write and read for, as long as the world still turns? ‘A Slow Fire Burning’:New Paula Hawkins thriller a dark meditation on tragedy, vengeance

Derek Chauvin verdict and how to check in on your Black...