Before the recent vision, the city’s last primary broadband intervention was negotiated under Mayor Michael R. Bloomberg in 2006. New York entered a franchise agreement with Verizon that gave the company the privilege of burying fiber-optic cable under city streets in exchange for installing high-speed Fios in every neighborhood. But Verizon has failed to do so in many low-income communities. In a public hearing in April, the city’s chief technology officer, John Paul Farmer, testified that the relatively few providers in some areas meant that there was little market pressure to bring the prices down. “The current oligopolistic system is broken, and it has built digital inequity into the streets and neighborhoods of New York,” he said.

The city recently reached a settlement with Verizon, requiring it to connect an additional 500,000 households, with at least 125,000 in underserved neighborhoods, by 2023. 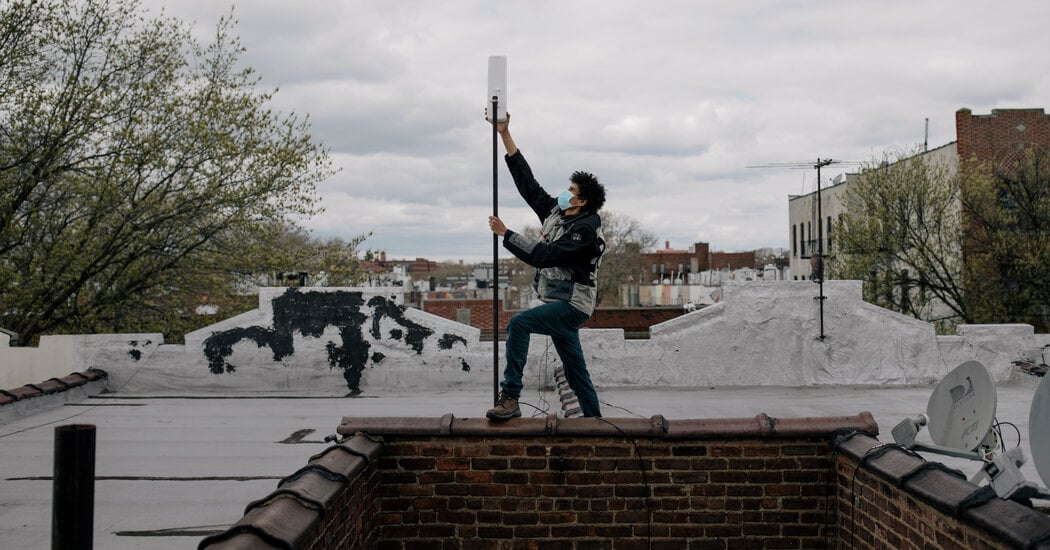 Chris Serico, a spokesman for Verizon, said the company was on track to meet the terms of its settlement. “Verizon is committed to finding long-term solutions that make affordable broadband options available to low-income Americans,” Mr. Serico wrote in an email.

Clayton Banks, the chief executive of Silicon Harlem, a company focused on increasing connectivity in Harlem, said he hoped that the city’s strategy of betting on more competition would work but that he was waiting to see how Fios and the current providers would be priced. “If you continue to build out infrastructure, which is certainly welcome and necessary, but you keep the same retail price,” he said, “you haven’t solved anything in terms of getting more people online.”

After months of back and forth, NYC Mesh got the green light to put a hub on the 24-story public housing tower in Bed-Stuy, along with two other developments in the Bronx and Queens. Four other minor providers, including Silicon Harlem, were selected to wire up 10 other NYCHA developments. As part of Phase One of the Internet Master Plan, to which the city will direct $157 million, NYC Mesh installed free public hot spots around the exterior grounds of the projects; the other companies must provide residents access to Wi-Fi in their apartments for no more than $20 a month.

NYC Mesh has applied to establish hubs on an additional 163 public buildings as part of Phase Two. This would allow NYC Mesh to cover much of the city in the next five to seven years if successful. Since each router installation comes with a free public Wi-Fi hot spot, NYC Mesh could help make the internet genuinely universal throughout New York City.

Even as NYC Mesh has continually grown, it still runs into the same trouble as the big providers: The internet sometimes goes down. Mr. Heredia and other volunteers pride themselves on resolving service problems quickly. Still, as the organization expands, it will need more people like Mr. Heredia to keep members happy.

The Parking Garage of the Future

Want to Buy a PlayStation 5? Befriend a Bot.